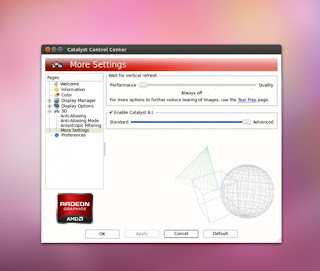 After several posts into their forums, it is now the time for AMD to launch their most awaited driver (bug-fixes concerning to Steam Linux client) that comes in their 3rd instalment of Catalyst 13.2 beta.  So, if you had problem with Serious Sam 3 or Team Fortress 2, now you can actually feel the ultimate gaming experience. Yet, there are many things remaining to be fixed, but this driver it was most awaited by many... many... people out there. Especially for us, Ubuntu users.


Feature Highlights of the AMD Catalyst™ 13.2 Beta Driver for Linux


According to AMD, there is a potential performance boost up to 300% improvement ONLY for Radeon HD 7000, 6000 series.  However, I tested the game with my Radeon 6950 and I didn't notice a 300% boost. The overall experience is updated, indeed, but I can't see this 300% boost the AMD claims in their website. I will make some test with Radeon HD7000 as soon as possible and then come back. Good news don't stop here because there is another thing about this driver release. For the first time (if my memory serves me right) AMD offers you support for their upcoming GPUs: AMD Radeon 8000 series GPU also known as Oland family. According to TechPowerUp "the Radeon HD 8870,  could offer performance comparable to today's high-end GPUs. The HD 8870 is clocked at 1050 MHz with 1100 MHz PowerTune Boost frequency; while the HD 8850 is clocked at 925 MHz with 975 MHz boost frequency. The memory of both SKUs is clocked at 6.00 GHz, yielding 192 GB/s memory bandwidth. The chips hence have 256-bit wide memory interfaces".

System Requirements:
Before attempting to install the AMD Catalyst™ Linux graphics driver, the following software must be installed:

AMD recommends you to run the installer and build the kernel automatically. Then reboot your PC and come back.
However, just in case, there is another alternative way which I prefer to use:

If want to unistall them

In case you experience any tearing problems for Gnome 3 shell users, you are advised to enable the Tear Free option from the Catalyst Control Center.
13.2 300 performance amd beta 3 catalyst How To install News radeon radeon 8000 ubuntu