How to Install STEAM in Ubuntu 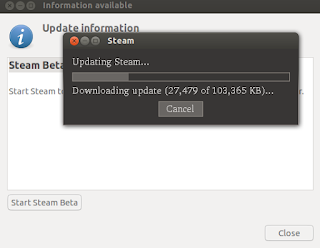 Let me show you how to install STEAM in Ubuntu. Not wine-wise but native! Yes, Steam is now a native Linux application -- yet in beta phase though.


Nov 6, 2012--Valve, creators of best-selling game franchises (such as Counter-Strike and Team Fortress) and leading technologies (such as Steam and Source), today announced the launch of a limited access beta for its new Steam for Linux client.

“This is a huge milestone in the development of PC gaming,” according to Gabe Newell, Valve President and co-founder. “Steam users have been asking us to support gaming on Linux. We’re happy to bring rich forms of entertainment and our community of users to this open, customer-friendly platform.”

The Steam for Linux Beta client is currently available for installation on Ubuntu 12.04. “An overwhelming majority of beta applicants have reported they’re running the Ubuntu distro of Linux,” according to Frank Crockett, a member of the Steam for Linux team, “We intend to support additional popular distros in the future; we’ll prioritize development for these based on user feedback.”

Within its first week, Valve received over 60,000 responses to its request for participants in the Steam for Linux Beta. The first round of beta participants has been selected from this group of respondents.

Steam is a leading platform for the delivery and management of PC and Mac games with over 50 million accounts around the world and over 2,000 titles offered.

More details regarding Steam for Linux, including community discussion, beta participants’ feedback, official announcements and syndicated news can all be tracked on the new Steam for Linux Community Hub athttp://steamcommunity.com/linux.


Double click upon the *.deb package and press Install button to start the installation process of Steam Client into Ubuntu. No matter 64 or 32 bit, just follow the typical process via Software Center.

Press Start Steam Beta button and wait ... downloading updates...
Either create a new account or login into yours. In my case, I've already have a STEAM account from my Windows partition.

Everytime you login into steam from different computer, Valve send you a confirmation link to validate the new computer with your Steam ID. So, I went to my Gmail inbox and there was already an e-mail waiting for me.

That's my code for this machine. Copy-paste your code and click next to move on.

Whooops. This version of Steam is currently in closed beta. So if you are not lucky enough you can't play any games so far. So please wait until the stable version is released.


If you have a valid closed beta key, make sure you have the right drivers for playing the games.


Furthermore, if you score low framerates, Speed up Unity for better gaming experience.
How To install steam ubuntu