- October 09, 2012
Today, AMD officially announced that the first Windows 8 RT tablets using their latest processor Z-60 will be available during this year in stores. Both Microsoft and AMD play a dirty game providing hardware support only to Windows operating system, leaving out Linux distros. In that way, Microsoft believe they would out-space Android tablets and make path for Windows 8 tablets. Personally, I wouldn't spent my $250 in a tablet locked in hardware... especially when all of my friends play with Android. But if I had to buy a hardware locker, then iPad 3 would be my first choice... just saying...

So, new processor eh? The idea behind the AMD Z-60 is to combine a powerful CPU and a GPU into a power-efficient package. The Z-60 is AMD's lowest power APU, delivering performance and up to eight hours of active tablet use, combined with two weeks standby power.  Well, it's obvious that AMD Radeon class graphics technology is likely to outpace Intel...but it comes at a price: The Z-60’s rated power is...higher than Intel’s...for the Atom Z2760.

What that could mean for potential customers is either [highlight color="yellow"]longer battery life...or better graphics[/highlight] 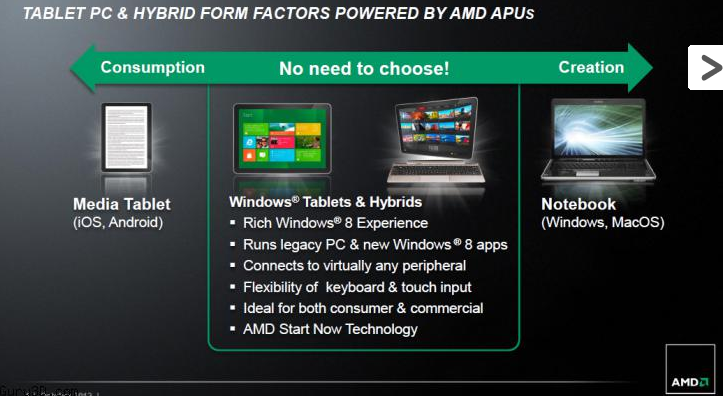 So, Z-60 comes with Radeon HD 6250 GPU, which has up to [highlight color="yellow"]six times the performance of Intel's[/highlight] "Cedar Trail" silicon chip. Customers will have to choose between possibly better graphics or longer battery life. Personally, if I had to choose between two tablets who both play the same games but one of them has better battery, then I would probably choose the second. However, if you translate this question into desktop PC, I would buy the first one -- better graphics.

[dropcap]Let's[/dropcap] become more specific and talk with numbers. According to AMD, they say that in 3Dmark 06 Hondo Z-60 scores 1701 while Intel Atom N2600 scores 373. Intel’s Z670 tablet chip scores just 137. Now that's a huge difference in graphics. In PC Mark Vantage Hondo scores 1770, Atom N2600 scores 1803 while the Z670 scores 1106. [highlight color="yellow"]Simply put, Z-60 is better that Atom N2600 in games. [/highlight].However, gamers use beastly PCs and PlayStation3 or XBox  game consoles, not tablets. Angry Birds or Fruit Ninja are not graphics’s intensive titles, meaning you don't need a Radeon GPU to do that job. You're offered something you can't exploit. However if you are going to play Call of Duty in your tablet then you need a Radeon card and doctor. A Radeon will be used for graphics and doctor to check if you are mentally retarded, playing an massive multilayer FPS into a tablet instead of a 22' (or larger) inch monitor :P 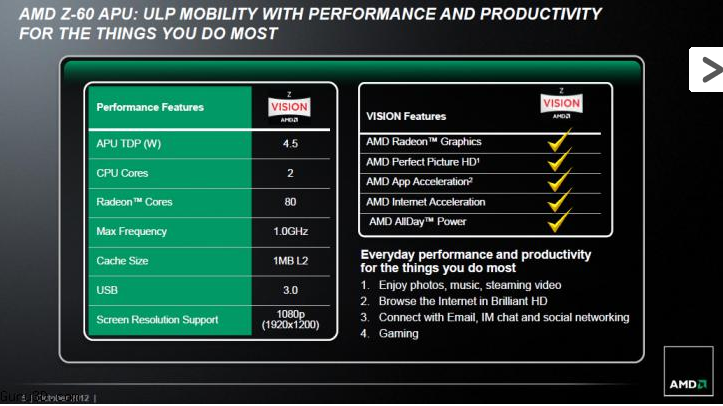 In addition, AMD Z-60 is not a System on Chip (SoC). Meaning that all USB, SATA, and other functions are still handled by the Fusion Controller Hub (FCH), that so there is little space inside the tablet. Notice that room space may not be important to you having a PC case or whatever, but when things comes in tablet, space is a valuable thing not to be wasted. In other words, AMD-Z60 is not designed for tablets or if it was then they didn't do a good job. 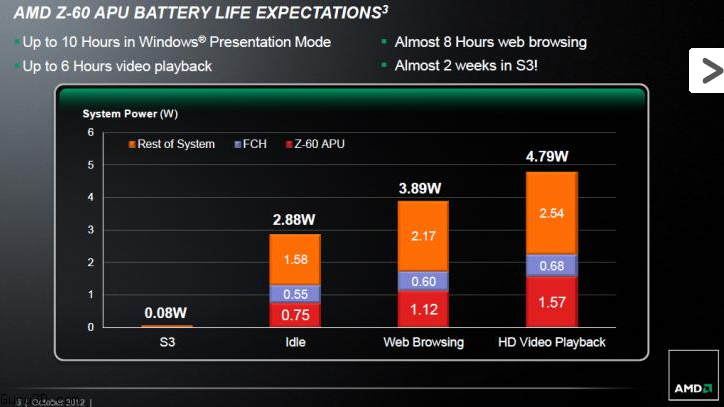 Nice try AMD, but we are this is not our freshmen year. Also, Fusion need extra power during normal use, about 0.5W. Some may say I am an idiot for pointing out 0.5W as a significant difference, but if you take a look further your nose, you will find out that he AMD Z-60 is rated at 4.5W, which is much higher than the 1.7W that Intel lists for the Atom Z2760 "Clover Trail" silicon. Simply put, this increased power consumption translates directly into observable poorer battery life, even using AMD's own data. While AMD claims that a Z-60 tablet kitted out with a [highlight color="yellow"]30Wh battery can manage 6 hours of 720p HD video playback and two weeks of standby battery life, Intel says that "Clover Trail" silicon can pull off an extra 2 hours of video playback and an extra week of standby.[/highlight]

If Technology has ever taught us something, when you sacrifice performance over economy, you fail. Now, if you take this combination and add a locked hardware only to a Operating System that's unknown in tablets market, you have an epic fail.
amd fail hondo Opinions tablets windows Z-60