Desurium is the open source side of Desura that we covered in our recent review called "Desura: Steam Like Gaming Client with tons of Free games". We've mentioned that in January 21, 2012, Desura has released the source code of Desura Client.

The release of the code means that you can download it, compile it and create executable binary or installable Ubuntu package of the client. This may sound difficult for the average joe, but for Power Users sounds exiting ! The most exiting part is that, Desurium developers have done a tremendous job automating the entire procedure so that you just have to run 2 terminal Commands.

A compiler is a computer program (or set of programs) that transforms source code written in a programming language (the source language) into another computer language (binary). The most common reason for wanting to transform source code is to create an executable program that usually is optimized for our hardware.
Program optimization or software optimization is the process of modifying a software system to make some aspect of it work more efficiently or use fewer resources and tailored to a specific hardware.

In general, a computer program may be optimized so that it executes more rapidly, or is capable of operating with less memory storage or other resources, or draw less power. That is not an option for a generic executable which is the most applications out there. Instead a compiled software on your machine utilizes the specific for your CPU Flags and thus removes any generic options that are compatible with all CPU's out there.
[/toggle]

There are two ways of building Desurium

Either way you will need to download the code, install dependencies (don't panic, there is a script included) and make a little tweak if you are on Ubuntu 64bit (if you have 4GB of RAM or more... you should be on 64bit. period.) and want also support for 32bit games.

The repository of the Desurium code is on github. You can retrieve the code by downloading the tar.gz file and stay with that version or you can stay up-to-date with the latest code using git and cloning the repo in a folder of your preference. If you know your way on GIT then please use it ;)

Yes ! You are an Ubuntu Power User and you want to be on the edge. To clone the repo run the following command in a terminal (asuming that you have installed git from Ubuntu Software Center)

then copy the content of the folder "Desurium" to a new folder (call it "TheCode") which we will use it to build it and so to keep the repo clean and clear. This way the "Desurium" folder will be clean and we can regularly run :

If you are on Ubuntu 64bit and you want support for 32bit games:

Creating a Desurium executable from source

Now take a break, make a snack, let your CPU Cores burn like hell and come back when the compiling finishes :)

Creating a Desurium package from source

Now take a break, let your CPU Cores burn like hell make a snack and come back when the compiling finishes :)

Once the compiling finished you can double clicking the Desura.x.x.x.deb package which will invoke Ubuntu Software Center and install the app.

Here is a screen-shot from my system after building Desurium package: 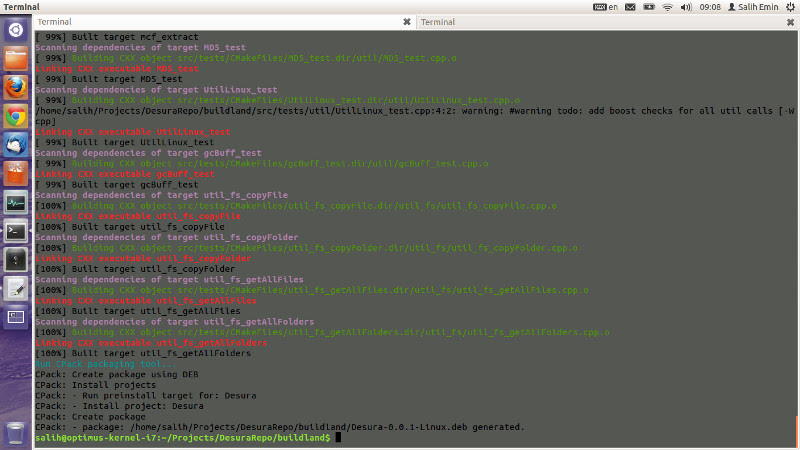 Compiling a software from source, may remind to some of you Dependency Hell. Whell not for the Desurium Code ! It is the first time in my "Living with Linux" life that a compiling was so user friendly! KUDOS (from Greek κῦδος, meaning 'glory') to the entire Desurium Community and Developers for their job ! Please consider visiting the official wiki here https://github.com/lodle/Desurium/wiki