How to install or upgrade Nvidia Video Drivers

- August 16, 2012
Welcome to our guide about NVIDIA drivers and how to install them in Ubuntu. In this article we aim to give answers and solutions in order to play games using nVIDIA GPU. There are two primary points you need to pay attention to: [highlight color="yellow"]GPU model and  Driver's version[/highlight] – since the fundamental standard of selection consists out of these two, and also (as a third point) the moral question (open source or proprietary) is another factor that effects all manner of Linux community and is always taken under FSF’s consideration.

Ubuntu has an answer on that and comes with open source video driver by default, called Nouveau. There is no need to put any effort to install Nouveau because this driver is already, completely installed 100% from the first boot. However this one comes with a price - lacking of 3D acceleration meaning most games will not work and have performance issues. As a side effect, NVIDIA made available another driver -- not opensource but proprietary -- called NVIDIA Unified UNIX Graphics Driver. Having this one installed, you make use of your GPUs hardware potential to the fullest and thus expect some serious performance boost.

Nonetheless, we would like to notice that UbuntuXtreme does not aim to go into open vs close source anticipation, but to provide you with something you can play games and benchmark your hardware, without problems. Truth has been told, the open source driver is struggling to perform or play modern games, thus we recommend using NVIDIA Unified UNIX Graphics driver; but if you are not much of a gamer guy, then nouveau will do the job as well. All in all, if you are serious about high-performance and gaming, you already know that NVIDIA proprietary driver is what you need.

In Linux, what a video driver does is allowing OpenGL API to interact with the graphics card.  Pay attention, that nVIDIA provides many different versions for Linux, meaning that your first concern is to identify which version/driver is suitable for your GPU. To answer that question you need to know your GPU's model (eg GeForce GTX680, GeForce Ti4200, TNT Riva etc) and then look for its name into their hardware support lists.

To identify your hardware, instead of using a terminal-based command, we prefer to use the GUI, since we believe that using the mouse is much faster than typing an arcane geek command. Go to "System Settings" and click on the "Details" icon. 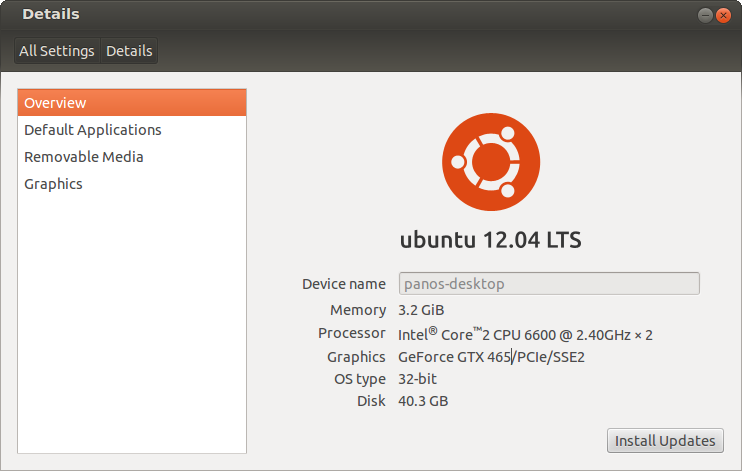 As you can see my GPU model is GeForce GTX465. Now you know what hardware you are running at your PC and you can search for the appropriate driver.

Installation: Our way, The easy and the hard way

We recommend to download and run our script which will automatically installs Xorg-Edge drivers. The script automatically removes opensource drivers (if any), nvidia proprietary old drivers (if any), blacklists and removes the appropriate modules and last but certainly not least, fixes sources and installs the latest nVIDIA drivers drivers and restarts your  PC. Please try our script.


to run the script

Do you want to install a PPA once, then stay back and relax for life? If so, then follow the easy path that most Ubuntu users do. Two choices here, but pick one: xorg crack pushers(aka Xorg-edgers) or Ubuntu-X. The difference between these two PPA is that Xorg-Edgers offers you bleeding-edge drivers directly from upstream git, while X-Swat provides you a safer -- recommended -- upstrream releases.

[dropcap]Warning:[/dropcap]In case you want to upgrade Ubuntu up to a new version (eg from Ubuntu 12.04 upgrade into Ubuntu 12.10) you have to remove this PPA or strange things will happen and maybe render unstable the whole system. So before you upgrade to the newer Ubuntu distro, please act wise and remove it..

After upgrading to the newer version of Ubuntu, you should re-able the PPA in order to get updates based on the new branch related to your new distro.

If for some reason you want to remove the nVIDIA unified Driver and go back into Nouveau opensource stuff, then follow the instructions bellow.

So far, we have covered the easy method and now you should be able to install and remove them properly. Pay attention that in case you want to upgrade your Ubuntu distro to the new one, make sure you have the PPA purged!!! You can stop reading now and reboot your PC. Have fun ;)

Still reading ah? If you consider yourself as person who posses significant knowledge on Linux and basic bash terminal commands, then feel free to compile the NVIDIA driver module in your own . There's nothing wrong doing things manually; grasp deep knowledge of things who which where and what is happening into your system. So, after identifying yours GPU model then go to NVIDIA webpage and browse into the Supported Products tab, looking for your model. If you purchased your GPU during the past 5 years then it's probably supported by the Latest Long Lived Branch version and Latest Short Lived Branch version. The difference between these two is that the Long Live Branch is something like Ubuntu LTS -- meaning only security updates and bugfixes. But if you can't find your model' name nowhere on that list, then you should look under the Legacy stuff. Supposing you own a long fashioned GPU, nVIDIA provides you their Legacy Driver -- support for very old models, such as TNT2, GeForce3/4 Ti/MX/FX series etc. Eventually, we recommend you to install the Short Lived Branch version -- no fear. Here is a step-by-step guide to do it.

[/toggle]
[toggle title="6. Remove your current driver in use"]

Pay attention that every time you update you kernel, you should repeat the whole procedure (Steps 1-8). Otherwise you will end up with a broken X server. In contrast to the PPA method, compiling the module by yourself it's not what Ubuntu tastes, especially when there are two Launchpad teams who provide you the dinner well served. So doing all that by hand is pointless. But if you still insist on that, maybe reconsider why you use Ubuntu instead of Arch or Gentoo.

Alright let's round things up. The NVIDIA Unified drivers are way better than Nouveau since they provide 3D acceleration. The greatness of NVIDIA is their combination of decent performance and low noise levels, and as such that dynamic shifted through their GPUs. It is common knowledge that their Linux drivers are way immature comparing to Windows, hence lot's of features are not implemented. On the other side of the scope, we also have to acknowledge that this driver is pitted against to a currently zero-market, since there is no actual profit from Linux gaming. But soon, things will change and then we will be happy to edit this article. Until then, may the source be with you, always!
drivers How To install nvidia