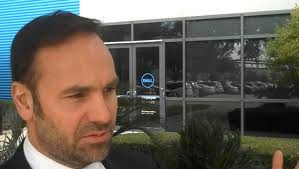 The O'Reilly Open Source Convention (OSCON) is an annual convention for the discussion of free and open source software. It is organized by the publisher O'Reilly Media and is held each summer in the United States. One of the talks was by Mark Shuttleworth, founder of Canonical, the company behind Ubuntu.
He talked about the magic of JuJu and how developers can easily benefit from Cloud infrastructure. He also (time 15:41) talks about how, 4 years ago , they set a challenge to Ubuntu by bringing design and beauty to desktop.

We had to move our desktop (to Unity UI) because if we didn't we would end up where Windows 8 is. With that, you have a shiny tablet interface and you sit, you use it, then you press the wrong button and it slaps you in your face and suddenly Windows 7 (Desktop Environment) is back !.

Shuttleworth has always been a big talker, with big ideas and to be fair, Ubuntu has progressed over the last four years in a way that it is a very different desktop than we had four years ago. Ubuntu TV and Ubuntu for Android will bring Ubuntu (and Linux) to more form factors then ever before too.