Do you remember Google Wave? 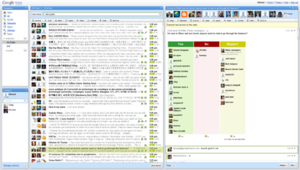 Does anybody remember Google Wave ? Google Wave was announced at the Google I/O conference on May 27, 2009 as a web-based real time communications protocol designed to merge key features of communications media such as email, instant messaging, wikis, and social networking. With software extensions it could provide contextual spelling and grammar checking, automated language translation and many other features.

Last night I got a reminder email that the service will be turned off on April 30, 2012. I totally forgot the existence of Google Wave as millions other people who may have heard at least a product named after Google Wave.

The lack of success of Google Wave was attributed to its complicated user interface resulting in a product that was a bit like email, a bit like an instant messenger and a bit like a wiki but ultimately couldn't do any of the things really better than the existing solutions.

Among other things, it revealed Google's inability to promote it's products beyond the usual geeks. So even if Google's intent

was that the product to be used by "consumers", soon Google realized that Wave was the type of application that would appeal to relatively select user base, mostly in business, science, education, politics and community groups and was unlikely to see the widespread use.

Google released most of the source code as open source software, allowing third-parties to build their own Wave services because it wanted the Wave protocol to replace the e-mail protocol. Google Wave was accepted by the Apache Foundation's Incubator program under the project name Apache Wave.

So... do you remember Google Wave ? Have you used it ? Did you checked what was about it ?