The Linux kernel can be found anywhere, Android mobile phones, on desktops,your internet router, on servers, data centers, etc. This is due to the nature and the license of Linux kernel.

As you may already know Linux is licenced under GPL and so any work based on the Linux kernel, it needs to be available in the same license and any changes in the code of Linux kernel have to be made available with the source code changes. This way anyone can work on it and innovate.

This year, the Linux foundation announced the T-shirt Design Contest for celebrating the 20th Anniversary of Linux. The design contest is for representing the impact of the operating system on computing, business and/or culture.

Developing and submitting code are not the only ways to contribute to Linux. Contribution to the Linux community comes in all forms, which includes submitting your creative design for the annual Linux.com Store T-shirt design contest. 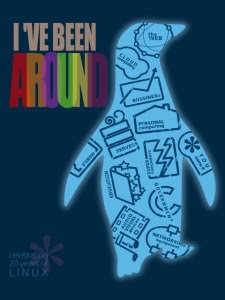 One of the finalists in this competition is George Boukeas, with the “Linux. Everywhere” designed T-shit. George is a member of the Ubuntu-gr community, and contributor to GNOME.gr project by working on the translation of Inkscape into Greek.

Personally I voted  his design not only because he is my fellow citizen of my country (Greece) but his design represents the purpose of the contest which is "the impact of the operating system on computing, life, devices, business and/or culture"