- March 30, 2011
The iQunix OS, for about 2 weeks has been the interest of many users of Linux . Numerous comments on osarena.net and so much more e-mails. Despite my initial concern that I would receive a myriad of complaints about my decision to create a distribution and messages with various problems that may be encountered by users, my concerns were not confirmed.

First, this showed me that iQunix for 99% of those who downloaded it, worked flawlessly. Indeed, the purpose for which they downloaded my distribution, really surprised me. Some people have installed it in an old laptop that they have connected to the TV to use it as a mini media center. Others installed it on a netbook because Windows was to slow. Others, managed to install it using Wubi installer even if iQunix was not supposed to work with wubi.

Secondly, this showed that the culture of the open source community has changed greatly from the early times I started using Linux.

For the last statement of mine, I will not say anything yet, because it raises an enormous conversation. For the first one I can say that the 1% that was missing from the initial release of iQunix was some minor functional capabilities that were essential for the end user.

So I am pleased to announce the availability of the Service Patch version 1 for iQunix 10.10. This upgrade fixes and adds some elements that were missing from the original edition:


So I encourage you to download and install it.

The above command fixes an annoying bug in programs that use "gksu" and do not accept your password.

After making all the above download Service Pach v1.0 (approximately 2 Kbyte): 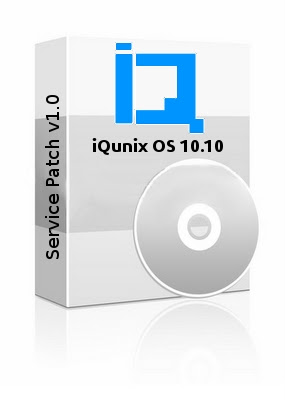 Finally double click on sp1-iqunix-10-10-v1 and install it. When finished logout and login again to have the changes take effect.

Have fun ... and do not allow your operating system and your computer tells you how to work ... you are the boss!
Distributions English Writings iQunix Operating Systems Patch Service ubuntu