Any Linux user will have a ROFLMAO attack and instant brain aneurysm, if a Windows user tells him that Linux needs antivirus protection ! Ha ha ha ha ha LoL LOL !

Any way, apparently the most obvious reason to have an antivirus protection on Linux is when you have or work in a mixed environment. Lets say, you have a Linux PC/Laptop/Netbook for the real life stuff and a Windows PC for gaming that are connected to each other for file sharing. In this case you would love to have an antivirus protection on Linux to scan the files you download  before you send them to your Windows machines over the network or USB. This way you are preventing any situation where your Windows machine will start having an undesirable behavior (e.g committing suicide with BSOD). The same security level can be useful when you have Dual Boot installation with Linux and Windows co-existing in the same machine.  Moving files from Linux to Windows partition can be scanned before they end up to be a ticking time bomb.

Many antivirus developing software companies, for the above mentioned reasons, have developed antivirus solutions to protect Windows machines from within Linux machines. One of the most well known and respected companies is ESET. I remember, 7 years ago, when Norton was  the "must have protection" on Windows PC's, with its bloated, RAM eater, heavy software... ESET at that time introduced the fastest, lightest and most effective antivirus solution ever existed.  Every one using Windows were downloading a trial version to check that savior  from "bad" Norton. Nevertheless, Norton learned a lesson from this and improved (so they say) their software.

On December of 2009, ESET introduced  a new family member the NOD32 Antivirus for Linux Desktop, in a beta state.

Features of ESET NOD32 Antivirus for Linux Desktop include:

Why did they bothered creating a new software ? Lets hear from their words :

Whether you use your Linux desktop to surf the Web or work on shared office documents, it is vulnerable to direct attacks by malware or may be targeted as a carrier for cross-platform viruses and other threats designed to target Windows and Macs. Network shares, email and removable media like USB keys are easy ways for multiplatform malware to spread under the radar.

Any fast-growing platform attracts the attention of cybercriminals and malware authors looking to profit from a community without robust antivirus protection. ESET NOD32 Antivirus 4 for Linux Desktop brings to the Linux community benefits that Windows users have trusted in and depended on: the smart proactive detection and small footprint of our ThreatSense® technology. ESET NOD32 Antivirus 4 will keep you and your network safe from emerging Linux and cross-platform threats without system slowdowns. Advanced heuristic technology recognizes and nullifies novel threats while other AV solutions are still waiting hours or days for signature updates.

One year has passed and it NOD32 is still in beta cycle ! Cool words but, apparently, nobody took their words into serious consideration, so I decided to give it a try... (because I am serious). I downloaded it from here http://www.eset.eu/download/beta. I double clicked and the installation was just as it is in a Windows machine... NEXT, NEXT, (Ignore the License agreement) YES, NEXT, NEXT ... OK thats....

The best thing was that it started to work immediately without any RESTART ! Also you can see at the notification area there is the traditional green "eye". I was curious, so I did a "Computer Scan"...

Results: 0 infected files. No fun for Linux users, going on "witch hunt"... Linux sometimes is so boring with out threats, like the ones Windows has... 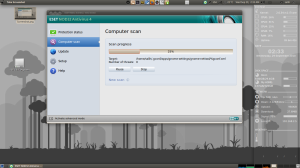