One day Google decided that it is time to see the best operating system for mobile phones... and created their own distribution of Linux and named it 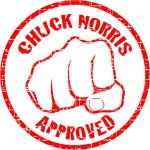 Android... a Smart, Strong and a sexy name for a mobile operating system don't you think ?.  OK... just for a moment... have you ever thought what would it be if Chuck Norris uses Linux and decides one day to crate his own version (distribution) of Linux and name it Chux (Chuck + Linux)? Wow man... that would be so... geek. So lets face the facts of Chux OS :

Why Linux doesn’t have any viruses? Because Chuck Norris uses it!

A Linux designed by Chuck Norris would require no backups, as it would be too scared of Chuck to fail.

CPUs run faster to get away from Chuck Norris

If Chuck Norris wrote Linux, the kernel would always panic. (kernel panic is the "black screen of death" for Unix OS's)

The most guaranteed way to make the Linux kernel panic, is to tell it Chuck Norris is mad at it.

If Chuck Norris wrote Linux it would be called Chux and you would literally need to boot it.

Actually…. if Chuck Norris wrote Linux, you couldn’t boot it, it would boot you.

Chux doesn’t have disk latency because the hard drive knows to hurry the hell up.

Chuck Norris needs neither "Help" nor "Support", those are for his enemies!

Chuck Norris plays 3D games in his head by interpreting the source code in real-time.

Chux does not connect to servers. Servers beg permission to connect to Chux.

Web pages on a Chux server are handled perfectly by IE6. No one dares question why.

Chux cronjobs run whenever they decide to run! (Cron is a time-based job/process scheduler in Unix-like computer operating systems)

Regardless of size, ALL computers running Chux are Supercomputers

Chuck Norris put the “ch” in “chmod” to remind us that he owns everything. (chmod changes the permissions of each given file for write, read, execute in Unix-like computer operating systems)

When Chuck Norris types ’sudo’ he automatically becomes superuser for every Linux server in existence.

#! is the last thing you remember hearing after booting up Chux, because of the Round House Kick start bootloader.

Chux can divide by zero.

Chux needs no browser because it holds the entire contents of the Internet in memory at all times.

There is no server version of Chux. Chuck serves no one.

If Chuck wrote Linux, developers would not be able to write bugs, bugs would be too scared to exist on chux.