I am pleased to announce the availability of a new series 5.x, the 5.1 version of 2clickUpdate. With this release I am trying a new approach internally (in terms of code) and structurally that will lead to a better expandable and maintainable software. Its possible that until the version 6, code will be changed in 90% by rewriting it from scratch.

New features in this release: 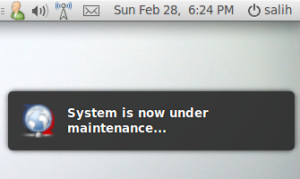 Now, a cool new balloon will notify you that your system is under maintenance. In future release there could be more informative balloons....

In 5.x series, you will notice that there is a special script that does what it says. It will automatically install all the dependencies of 2clickUpdate without the need to search for them in your package manager. In future releases I hope that this script will do more.

From now on, there is a special file called CONTRIBUTORS that will include in a centralized way, the names of people that contributed in any way to 2clickUpdate and helped me to made it better.

As you can see the 5.x series is more than just a new release, is the beginning of a new approach and personal knowledge expansion.