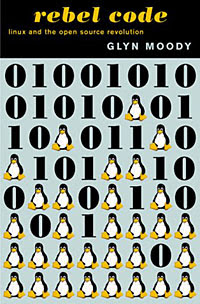 Glyn Moody is a technology writer. He is best known for his book Rebel Code: Linux and the Open Source Revolution (2001). It describes the evolution and significance of the free software and open source movements with many interviews of all the notable hackers.

Rebel Code follows the progress of Linux and several other open-source projects (XFree86, Sendmail, Perl, Apache, Samba...) from the grandfather of Linux, Unix, in late sixties; then we follow the stories of Andrew Tannenbaum's Minix system and Richard Stallman's project GNU through the eighties, until we finally arrive to the beginnings of Linux in 1991. From then on, we follow it rise and blossom, with its added functionalities, with the first contributors to the kernel starting to appear, and then the first Linux distributions.

"Open source" began as the mantra of a small group of idealistic hackers and has blossomed into the all-important slogan for progressive business and computing. This fast-moving narrative starts at ground zero, with the dramatic incubation of open-source software by Linux and its enigmatic creator, Linus Torvalds. With firsthand accounts, it describes how a motley group of programmers managed to shake up the computing universe and cause a radical shift in thinking for the post-Microsoft era. A powerful and engaging tale of innovation versus big business, Rebel Code chronicles the race to create and perfect open-source software, and provides the ideal perch from which to explore the changes that cyberculture has engendered in our society. Based on over fifty interviews with open-source protagonists such as Torvalds and open source guru Richard Stallman, Rebel Code captures the voice and the drama behind one of the most significant business trends in recent memory.