- February 09, 2009
In January 22-2009 Linus Torvalds, the founder of Linux OS, talks about the open source identity. He spoke about a host of topics 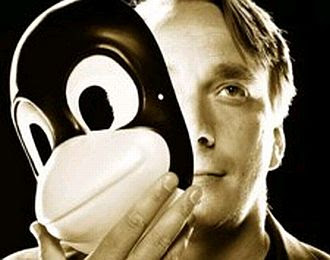 including point releases, filesystems and what it is like switching to GNOME. He also puts Windows 7 in perspective. I would like to point some of them :

It's 2009 and Linux development is approaching 20 years. How do you look back at the past two decades?

I feel like its very natural and I don't think it will go away. I have a suspicion I will be doing this for a long time and there is no feeling of "it is done". I don't have a feeling to pass it on [maintenance of the Linux kernel], but I let the people I trust make the decisions. I can't second-guess them as it wouldn't work and I would waste a lot of people's time. All the sub-maintainers sync their git trees with the main code and I check they haven't done something horrible, but that's rare.

There has been a lot of buzz about filesystems lately, including Sun's ZFS. What would you like to see Linux adopt here?

Filesystems are easy to get excited about. They are easy to add to the kernel so there is almost no risk. We have something like 35 filesystems supported and a lot are not realistically used much. They are candidates for removal, but people are still using them. We add filesystems easily and let history take its course. In the development community there are two camps - people that want stability and people that want to release often. End-users will do crazy things that no amount of testing infrastructure will get so there are competing pressures. You want filesystems to be stable, but you can't be in beta forever. Btrfs is developmental, but it was merged in the main kernel to help people test it.
To some degree Btrfs does what ZFS does. Some uni ran ZFS as a module in Linux so using it with Linux can be done. The biggest thing Sun did with ZFS is they were good with PR and marketing. There are other projects that wanted to do what ZFS does on Linux. Sun started finding the NetApp patents as the NetApp patents kept people from doing things they wanted to do. I hope ZFS clears the patents issue.

While there are hundreds of Linux distributions, in recent times Ubuntu, OpenSUSE and Fedora have captured most of the mindshare. Do you think this will continue and will the new netbook paradigm be how people end up getting Linux?

It's a huge job to do a distribution. The reason there are hundreds is it is easy to start your own, but if you want to be a leader and introduce new code, the testing and QA involved is enormous. It depends on having enough users that you get coverage and it is unreasonable to expect too many large distributions. Ubuntu grew surprisingly quickly and maybe that can happen again. I use Fedora for historical reasons. I have one of the EeePC laptops and I re-installed my own distribution so I am the wrong the person to ask. However, most users don't want to do the installation and configuration.
We are in the first phase of netbooks and there are some teething problems. The dumbed-down interface was a teething problem and the first netbooks were underpowered. I'm hoping the next generation will be more powerful and offer a better user experience. I was doing kernel development on a netbook and it was not at all horrible. The screen was too small, but we are getting to a stage where you can get a cheap good laptop. A few years ago you could get a small netbook but it would be twice the cost. The netbook market changed the game -- they are not seen as an executive toy, but a low-end laptop which is much healthier. With netbooks a lot of the desktops have trouble going to smaller screens. All of sudden you can't press the okay button because its outside the screen. As screens go as small as phones, Google's Android could be a contender for netbooks so you may see Android growing up instead of desktops growing down.
Linux on phones is hard as there are so many regulations, but I was really happy about Nokia's decision to release Qt as LGPL.

What do you think of Windows 7 and Microsoft's operating system development cycle?

Windows 7 being better than Vista is saying a lot. Microsoft may have a huge PR advantage as people will compare it to Vista and think it is good so "angels will sing again" like they did with Windows 95 compared to Windows 3.1. So maybe Microsoft did this on purpose. I think Microsoft has realised the Vista development cycle is way too long and it would be insane to do that again. They might aim for a two-year development cycle and I think that is too long. They should decouple the operating system from the applications and release sooner.
For Linux six months is quite tight. All the pieces you put together you hope they are stable, but there will be surprises and six months is a short cycle when you put together so many packages. An annual release cycle is a reasonable cycle for doing a whole distribution. In the Linux space once a year is reasonable, but then you have the incremental releases. It's hard for a commercial company like Microsoft, that wants people to pay for releases, to do a yearly upgrade. Apple has done faster upgrades, but it has charged less for the releases. This is not a problem for open source as it's free software, but this is one of the things Microsoft has to balance. They want people to rent the software, but users don't want to. If you do development over five years and make so many changes it is more painful for the user. The cost of the pain is likely to be higher than the cost of the operating system which is why people are slow to upgrade. A lot of what made Microsoft successful in the nineties is gone. There is a reason why people don't think they are successful anymore, but hey, I don't have a business model at all!

Another area where Linux is used extensively is in hosted software or "cloud computing" where users don't have access to the source code, is this a good or bad thing?

It is to some degree inevitable as within certain classes of software it's the only model that makes sense. Look at Google Maps. It does not make sense to have it on a device. The whole idea is to have it on the cloud because the information is huge and "out there". If that means the user never sees the source code it's not something you complain about it. I'm happy with Linux being used for that. Projects that are specifically designed for software-as-a-service in the backend, and only the output of the project is what gets distributed, then use the Affero GPL. Linux is not that project.
One of the problems I had with GPL version 3 was it was possible to add Affero-like extensions and "licence creep" happened which can make future versions of software licence incompatible with previous versions.

Are you going to say 2009 is the year of the Linux desktop?

I make controversial statements without thinking a lot. I'm not going to say it's the year of the Linux desktop as it is a small encroachment process. But look at what Firefox has achieved and how it is creeping up on Windows. It is important projects like Firefox and OpenOffice.org are spreading the whole notion of open source wider. They work cross-platform and the project shouldn't be tied to the platform. People will realise the lack of tie-in means you can chose a platform and that is much healthier from the market standpoint than having to make a platform decision for an application.
In a fair market Linux will have a much easier time competing.